Young Boys and the Need to Develop Empathy 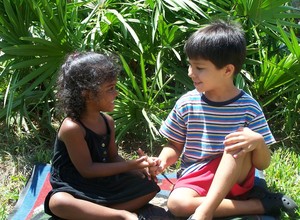 Doyin Richards previously wrote an article on boys need to better develop the skill of empathy (see below). This is key for them in the future as husband and fathers, but is often not done because it does not align with social norms, which after you read this you will agree need to be changed. Without the skill of empathy boys head down a negative path, as caring for others is key to the development of positive social skills. Without it, in the end, one has trouble with being a husband and father. The base skills necessary for the development of empathy are best taught during the Birth to 5 year old window. After this time has passed it becomes increasingly difficult for children to learn this all important skill.

As a young boy growing up, I wanted to push life's fast-forward button to instantly become a man. "Men can drive, buy things, and do whatever they want," I thought.

But that was the cool part. It became confusing when I tried to learn about how men are supposed to act.

When I turned on the TV to find out what manhood looked like, it often involved destruction.

In some instances, it was a dude destroying buildings.

In others, it was a dude destroying other dudes.

My dad was (and still is) an amazing role model and taught me that being a man means so much more than drinking beers, bench-pressing 250 pounds, and mean-mugging. Unfortunately, what I saw from my old man didn't jive with what I saw elsewhere.

That's why it's not surprising to find young boys interested in toys that perpetuate the tough guy stereotype, such as guns, swords, action figures, and violent video games.

But how will the aforementioned toys prepare our young boys for manhood?

Every toy doesn't need to be a teaching tool and there's nothing inherently wrong with kids pretending to blow stuff up in their backyards. However, no matter what young males decide to do for a living, there's a high probability that many of them will become fathers.

Why not give them a head start on what it means to be a modern dad by providing them with a doll for the holidays?

Here are three reasons why buying a doll for a boy is a good idea.

As a dad with two young daughters, I love seeing how the world continues to evolve to include their diverse interests. In past generations, little girls were read the memo to be nurturing, loving, and not too much else. Now they're being taught to become leaders, doctors, coders, scientists, engineers, and anything else they desire.

Just check out the awesome work GoldieBlox is doing to help inspire the young ladies in our lives. The company released ashort video capturing the frustration girls feel when searching for toys that suit their interests.

Sadly, society is not so quick to follow suit when it comes to boys. Yes, they can be leaders, doctors, and scientists — but playing with dolls? Not so much.

In order to be a well-rounded human, wouldn't it make sense to show little boys that it's just as cool to be wild and competitive as it is to be loving and nurturing? If it's cool for girls, it should be cool for boys too.

This magical button delivers Upworthy stories to you on Facebook:

Many parents can remember when their firstborn children became big brothers or big sisters for the first time. The proud older sibling would hover over the baby like a hawk, reacting at every giggle or cry. Rare were the moments when they didn't offer to help with feedings, baths, or anything baby-related.

In other words, the big kids felt deeply connected to the emotions and well-being of the smaller kids in their lives.

Sure sounds similar to playing with a doll to me.

Studies have shown that empathetic people enjoy greater success emotionally, academically, and interpersonally than those who don't feel empathy.

Girls have countless items at their disposal to display their nurturing side. What happens to the boys who love playing with their younger siblings but aren't allowed to play with dolls?

It cuts off one valuable avenue for our boys to learn about empathy, and that absolutely shouldn't happen.

Since Joey was young, he always had baby dolls, accessories, and anything that would encourage him to engage in play that celebrates empathy and nurturing.

The results are a happy and confident little boy who will surely become a great man someday.

"Joey loves dolls and has the confidence to speak up when he hears that boys shouldn't play with them," Mainville told Upworthy. "He's also a loving and protective playmate with younger children due to learning empathy at a young age."

Is there a better sign of a confident child than one who is willing to do whatever he wants without worrying about what others think of him? In a copycat world where most kids are content to fit in, it's refreshing to see boys like Joey who aren't afraid to show their nurturing sides.

Sure, toughness breeds confidence — but in today's world, sensitivity and empathy comprise what true toughness is all about.

So why not pick up a doll for that little boy in your life this holiday season?

Other than potentially finding a new favorite toy, it will give him the confidence to know that he can be anything he wants to be in the future.

And there's a good chance that "thing he wants to be" will be a good dad.