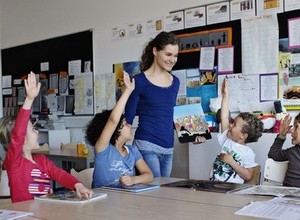 Get them while they're young: A baby forms 700 new neural connections per second.

Teacher with class of kids with raised hands

Brain science and economics show that intervening to help children when they're very young is more cost-effective than waiting until they're in school. That's the conclusion of a new report from the Bridgespan Group and the Pritzker Children's Initiative. The report's lead author, J.B. Pritzker, is an entrepreneur and philanthropist; his sister, Penny, is the U.S. secretary of commerce.

Here are 10 claims sprinkled through the 67-page report for the benefits of investing in early interventions in the lives of disadvantaged children. They're drawn mostly from others' research. These are direct quotes:

Katherine Kaufmann, a co-author of the paper who is a partner at Bridgespan, says her colleagues came up with one other statistic on their own—and in some ways it's the most important: Half of all children entering kindergarten are low-income (entitled to free or reduced-price lunch) and half of low-income children aren't fully ready for kindergarten when they enter. Which means that one in four children entering kindergarten are both low-income and not ready to learn. That's the Pritzker Children's Initiative's target population. Says Kaufmann: "Here's this critical milestone in our children's lives that we're not managing particularly well."